The Gaea camera was arguably in the most beautiful setting of all the cameras.  It was situated atop of a waterfall and looked across the creek at a fallen tree.  I hoped that this fallen tree would be a natural passage for animals.

Unfortunately, there was a lot of humidity and it caused this camera to fail prematurely.  The same model cameras clicked off 300-500 shots during the same period of time in other locations while the Gaea Camera only took only 30 shots.  At first I was immensely disapointed, but when I looked through the images I discovered the Gaea cam's failure to be a blessing in disguise as you will discover in the images near the end of this post. 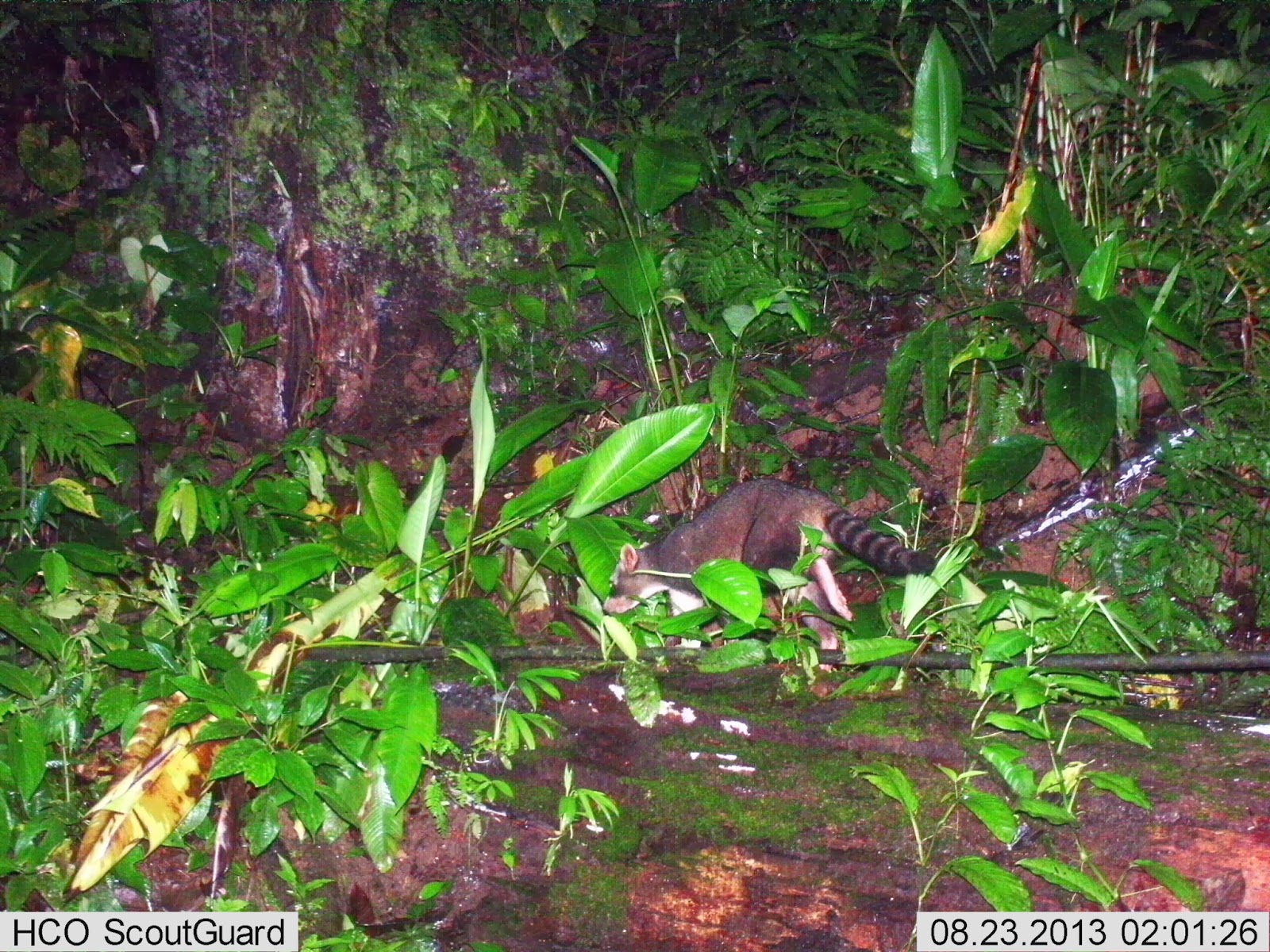 The beautiful image of the Crab Eating Raccoon was taken at 2 am.  The black tube is actually our waterline that connects the house and pool to springs up in the mountains.  It provides all of our delicious drinking water and feeds our pristine creek. 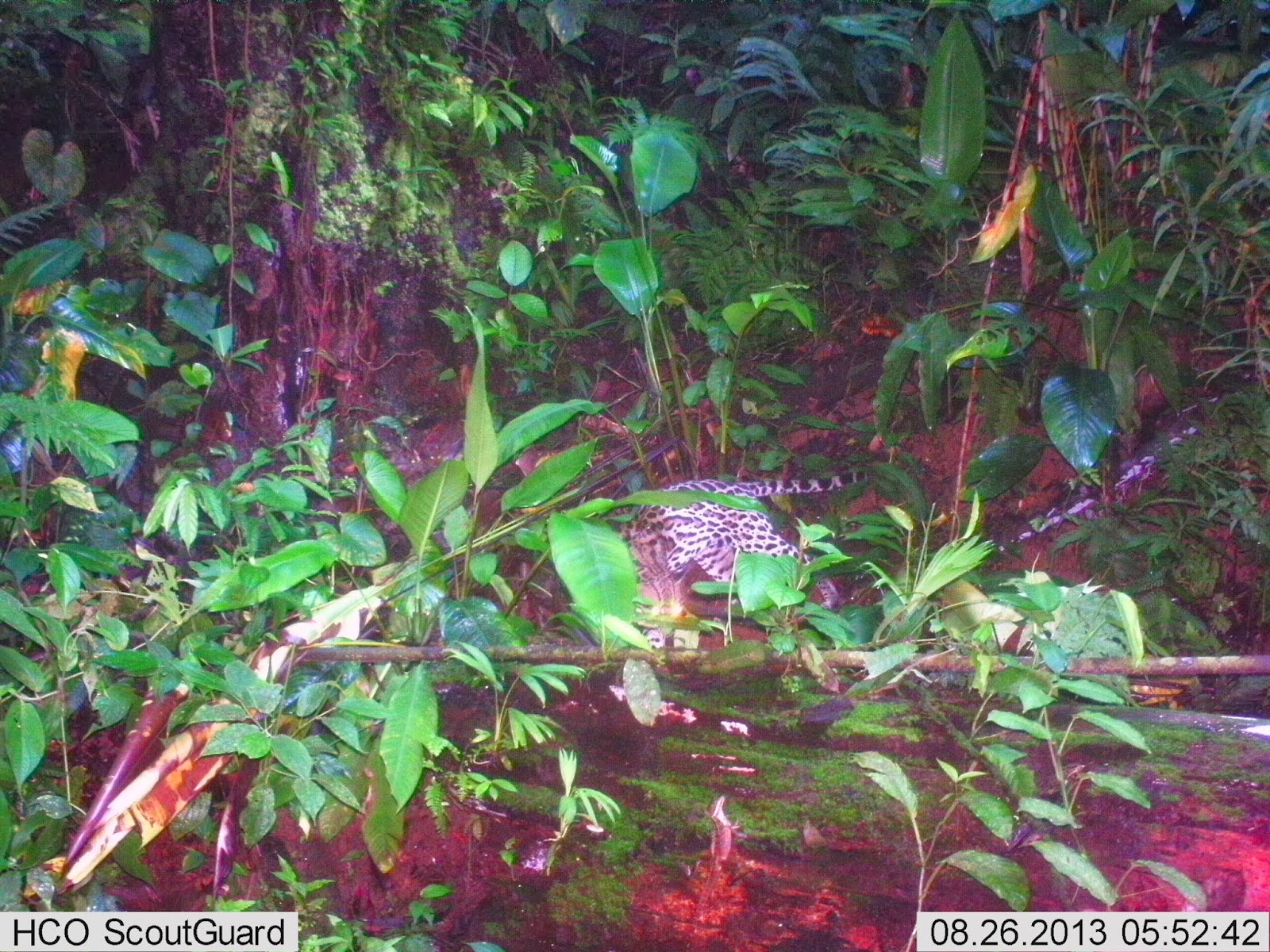 This ocelot image was taken around 6am.  In Costa Rica, it is usually light by then.  We have only seen one other ocelot image in daylight at that was at noon in May of last year. 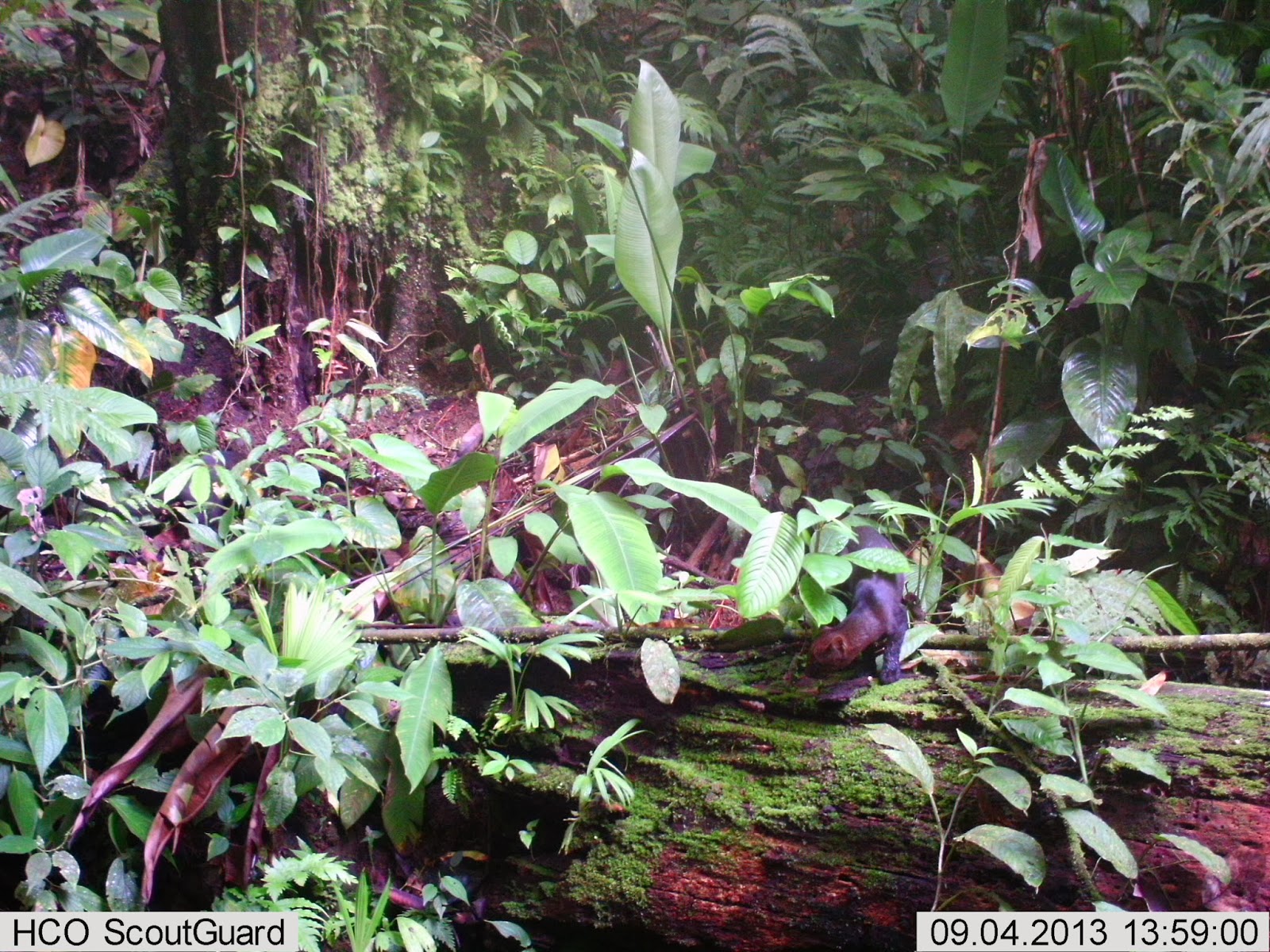 By now you have probably seen our video of the 3 Jaguarundis (if not, here is the link:Jaguarundis).  It is hard to tell if this is one of them, but I'd say that it is very likely as they all appeared on different cameras during the month of September.  Notice it's striking red head.  This is a very interesting wild cat and we look forward to seeing them again on the cameras.

Hmmmm....Yes, that is a poacher...twice.  Thanks to the Gaea camera for alerting us to his presence.  Of course, what he is doing is illegal.  He is trespassing.  He is hunting on protected land by law.  His rifle is likely to be without a permit.  He is also believed to be trapping Pacas and crayfish.    He is also responsible for the deep slashes in the above tree.  The Vaca tree's latex sap is used to soothe stomach ailments.
The good news is that the camera stopped working before he was alerted to it.  He was not seen on any other cameras, so his poaching is not wide ranging on the property.  We know exactly who he is and where he lives.  He is also in a precarious position in that he is not even a Costa Rican.

We opted to keep a wary eye out for him as being the 'devil you know'.  If his trespassing has not ended in the next few months he will be reported.

The Gaea camera was replaced in that location with a non flash camera.  It has been sent away for repairs and we have a surrogate camera snapping away as you read this.

Thanks for reading.  See you soon.

Did you see what the "Bella Rex" Camera got?
Bella Rex Camera Trap Video

Visit the Ocho Verde YouTube Page for other scintillating videos.