Cute boy Ocelot ditches Mom...hangs out...catches snake...plays with camera... is scolded by Monkeys... Brings a friend by to show off!

The entire video is down below. 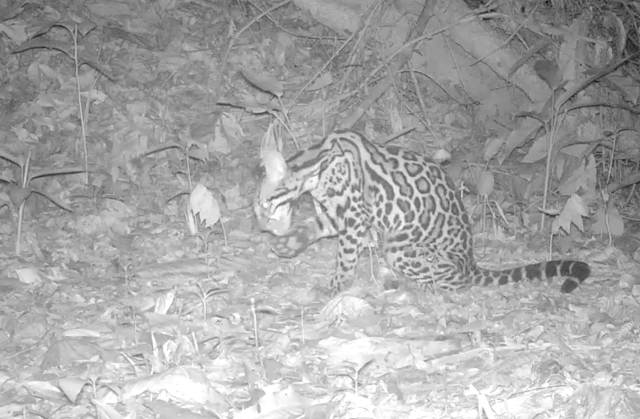 He licked his paw and cleaned his face.

"What are those blinking lights on that tree?"

"Where is Mom?", he thought... and he wandered in last direction...

What are those strange blinking lights...I'll lick them...no...I'll bite and twist them.


Bored he wanders off...

But around 3 the next day he returned and visited with the cameras as endangered squirrel monkeys screamed at him overhead.

The humans walked by that night and noticed the twisted camera.


Later that same night, he shows back up and plays in front of the camera with his friend!

Here is the full video!  If you can click the "Watch on You Tube" button for a bigger picture.

Those of you that wish to support our efforts can do so in several ways.  You can always send us a contribution via snail mail or though PAYPAL.

A more painless way for you to help out is by watching our OUR YOUTUBE CHANNEL
Sooooo…..if you could subscribe to our channel and share our videos it would be great!  Here is a handy button.  It is that easy!


If you like interesting snakes, visit our other blog:
The Costa Rican Snakes Update

Posted by Ocho Verde Wildlife at 10:33 AM No comments:

Look what we Caught! April 2018 Update

Hello and Welcome Back!

I had this blog written and ready to publish last week, then we got some really exciting news.  We identified one of the rarest mammals in Costa Rica on one of our cameras!  How rare?  We are likely one of about five sightings.

When I could not find the above rat in my field guide, I recalled that an arboreal rat had recently been discovered living in Costa Rica…I looked into a Tico Times story about Costa Rica's 250 mammal species . The Rufous Tree Rat was only discovered to be in Costa Rica in June of 2015.  I sent images  via email to the researcher mentioned, José Ramírez, with images of our buddy. Late Friday afternoon he confirmed, with 90% certainty and 100% enthusiasm, that it is indeed the Rufous Tree Rat.  Here is his description of the finding Here is his description of the finding.

I was later contacted by Naturalist Jim Córdoba_Alfara, who actually photographed the Rufous Tree rat for the first time in Costa Rica at La Tarde Lodge on the Osa Peninsula.  He confirmed our sighting and is including our project’s images in an upcoming paper about this understudied and poorly known rodent’s natural history.  While called an arboreal or Tree Rat, the the Rufous Tree Rat and its close cousins are more closely related to guinea pigs and chinchillas of South America.(via Canopy Family Website)

The other new visitor is none other than the wily Coyote.  Despite having 15 camera traps throughout the forest it never appeared on any cameras.  I just happened to see it run past one of the cabins so I set up a camera and it was a nearly a daily visitor.  We also found some droppings and realized that it was probably feeding on iguanas or basilisk lizards.  Jaguars, Pumas, and man are the coyotes only known predators in Costa Rica.
One critter that we have suspected of being here is the Mexican Mouse Opossum.  Well we finally got a good enough image to properly identify it.  They are some of the smallest marsupials in the New World.

We were also visited by the Neotropical River Otter again.  This time it was actually in the water and was probably looking for freshwater shrimp.  Pollution and habitat loss are two factors that have led to the Otter's decline in the last few years.  THESE VIDEOS ARE BETTER IF YOU MAXIMIZE YOUR SCREEN

The other rare mammal that we saw was the Greater Grison.  These small mustelids (Weasel Family) run around the forest and are rarely seen by people.  We are catching more of them on camera traps. We were fortunate to have a short video and a nice clear picture of one.

It has also been a few years since we have captured good images/video of an Ocelot and her cub.  From October through our last visit in March, we saw them on a regular basis in all parts of the forest.  I compiled a short clip of their wanderings.

When we started this project years ago, Aida told us that it was not uncommon to see naked people out in the woods.  Sure enough, we got several video clips of an amorous encounter of this gentleman and his lady friend!

We teamed up with Osa Conservation for the largest Camera Trap project in Central America. They created a grid with 120 squares(240 cameras, 1,920 AA batteries) over the Osa Region of the Golfo Dulce.  Each Square has two opposing cameras.  The study will run for 90 days.

The data collected will assess the health of the endangered Jaguar population, their prey, and their activity in vital corridors throughout the regions of Costa Rica.  We (OchoVerde) were responsible for 5 squares(10 cameras).   Exciting news will be coming from this research over the coming months. Here is the link about what we’ve done so far .Click here to learn more about this amazing project.

Our five wireless cameras continue to send us email images from over 3000 miles away.  Of course, you can follow along on the Zoological Society of London's Instant Wild Page.  Or better yet, sponsor your own wireless camera in Costa Rica and get these remarkable animals send directly to you.  EMAIL ME if you would like to do this!

We have also been working with Osa Conservation for almost two years to get wireless cameras working out in the Osa Peninsula near Corcovado National park.  They finally received a wireless network out there.  I was apparently able to crack the code in order to get their network up and running.  We had some great help from a new wireless camera company called Barn Owl.  It seems as if it is only matter of time before we get images of a Jaguar!

An ancient indigenous tribe called the Diquís were famous for their carved stone spheres.  Nobody really knows how and why these were carved, but they were rolled up creeks to various places in Southern Costa Rica.  Many have been removed for museums or stolen for private homes, there is even one rumored to be in a yard in Charleston...

We were presented with an opportunity to visit a site literally right down the road from Ocho Verde where several of these spheres are located.  We placed a wireless camera on the property and mysteriously the 12 new lithium batteries died before one photo could be taken.  I eventually moved it to another spot where it seems to be functioning. It is sending about 60% of its pictures.
I put one of our trusty white flash cameras down by the creek and got some outstanding images.


What in the hell is it?

Our cameras take great pictures, but sometimes we just cannot figure out exactly what is going on. We have two cases that we would like to share here.  The first is this strange apparent beam of light shooting across the frame.  It could be an insect, but at 5:36 am it is pretty dark at this place.


The second mystery image involved what I think is a rather large animal.

I would certainly say that it is dog sized, but I cannot figure out how or why it has those parallel lines running across its body and legs.   I would guess camera malfunction, but they appear to be behind the leaves as well.
If you have a guess on that these are, please email me or leave a comment below.  Thanks.

Bonus Time
As if this blog wasn't long enough...

Those of you that wish to support our efforts can do so in several ways.  You can always send us a contribution via snail mail or though PAYPAL.

You can always support us by subscribing, watching, and sharing our videos on YouTube. For evry thousand vies, we get a few pennies and this does add up over the years.
Sooooo…..if you could subscribe to our channel and share our videos it would be great!  Here is a handy button.  It is that easy!


If you like interesting snakes, visit our other blog:
The Costa Rican Snakes Update
Posted by Ocho Verde Wildlife at 9:42 AM No comments: